Laughing Pig Theatre is proud to announce the fourth entry in its popular storytelling event. The theme for this outing is Lessons Learned. We are calling for writers to submit 1-6 minute monologues about lessons you have learned in your life. These monologues can be comedic or dramatic; a variety is always preferred. We also encourage writers with diverse backgrounds to submit. You can either request to perform your own monologue, or we will cast a talented local actor to perform it on your behalf.

Submissions are due midnight March 12. Performances of selected monologues will be May 1, 2, 3. This is not a paid opportunity. Follow this link to submit

January 9, 2020January 8, 2020 Laughing Pig Theatre
Continuing the spotlight on Always Plenty of Light at the Starlight All Night Diner by Darcy Bruce, we have the doctor played by the super kind and all around cool guy, Casey Anderson. 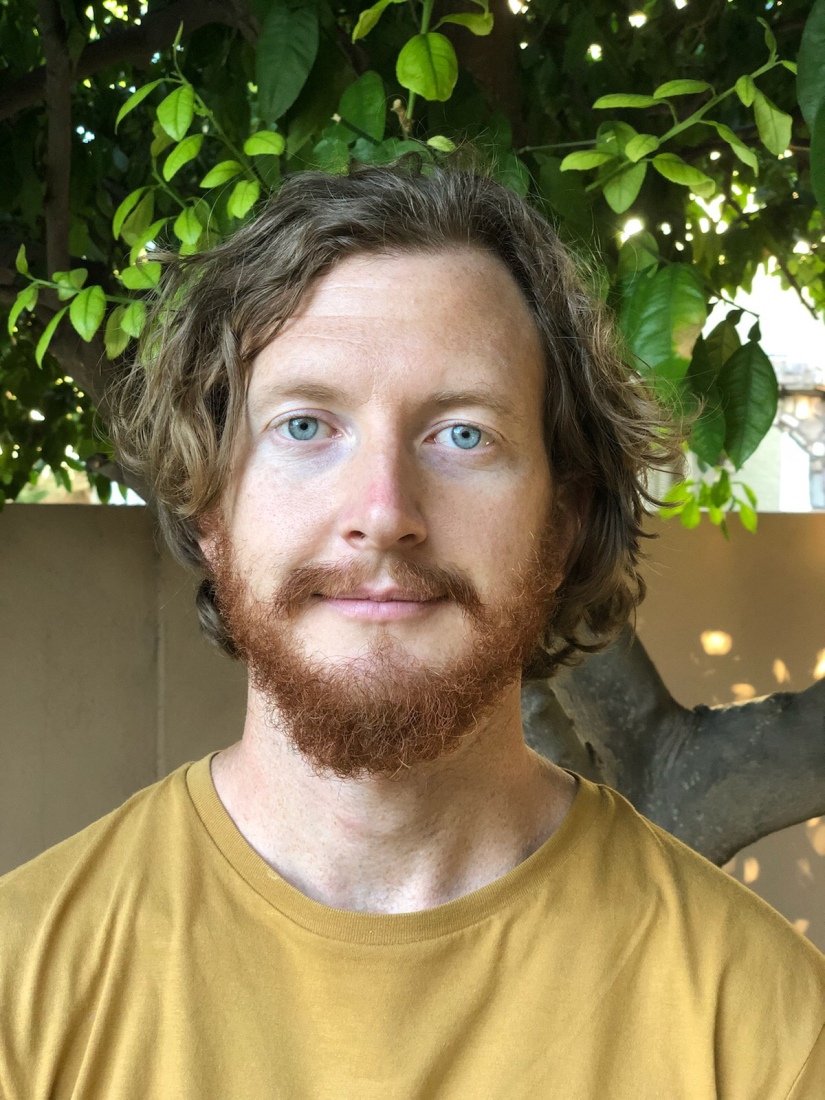 What is your favorite and least favorite part about Dr. Moxi?
I truly wish the Dr. would be more open to communicate his feelings with those around him in a more intelligible manner? Yeah, yeah, if people actually communicated then there goes like 99 percent of all drama, but this is just like a what if, ya know?
Why did you want to be involved in this show?
I wanted to be involved with this show because everything Laughing Pig Theatre does is passion driven. Performing like this is new to me and daunting at times and they create a space where I feel comfortable and challenged.

If you could travel to any time in history, when and where would you want to travel? Why? What would you want to see?
Hands down I’d love to travel to the Manhattan area before colonizers came and mucked it up. I watched A New World by Terrence Malick and yeah he clearly didn’t film then/there but his images of it where gorgeous.
What is your favorite type of Pie? Convince us.

Lemon meringue tart. I think that counts as a pie. Anyway, the crust is more substantial than those flaccid apple pies or punkin pies. And the tart lemon custard makes your mouth pucker just a bit and the toasted meringue on top really mellows it out is to die for.

What is next for you?
Next I’ll be in another Laughing Pig Theatre production called Shopping and F*$#%ing. It’s gonna be rad. Come check it out
Get your tickets now for Per, playing Friday-Saturday nights September 20-28 at 7:30 in the Mesa Arts Center Acting Studio. Discounts available for students, educators, veterans and theatre artists!
January 8, 2020January 7, 2020 Laughing Pig Theatre
Next up in Pigpen Profiles with the cast of Always Plenty of Light in the Starlight All Night Diner, opening this Friday, January 10th. We have the quirky and lovable wunderkind Danni played by the wonderful Itzel Romero.

Picture credit from Funny for a Girl by Bella Tindall
What is your favorite and least favorite part about them?
My favorite part of the show is watching the romance between Sam and Jessa develop throughout the show. You can see how much they care for and pine fro each other, and then as they come together-! It’s lovely and I really enjoy watching it happen.
My  least favorite part would be the time travelling slow motion- and that’s only because I myself am so bad at keeping the right timing. I always end up in the wrong place- I just feel a little silly when I’m sitting and done and everyone else is still going or vice versa. (｡´∀｀)ﾉ

Why did you want to be involved in this show?
To be honest, I saw the character descriptions and I was like Yup! This is for me! It’s LGBT and got dinosaurs, that’s my whole deal, I’m IN! Then I read the play, and honestly I really loved it. I think it’s a lot of fun and clever and I just got more excited than I did before about this show and the story it tells.
If you could travel to any time in history, when and where would you want to travel? Why? What would you want to see?
Y’know? I never have a good answer to this question. I’d like to see some dinosaurs, but then again I could go to renaissance times and wreak havoc with their perception of mythology…… Ahhh I don’t know! There’s a lot of history out there and I just don’t know where I’d start. 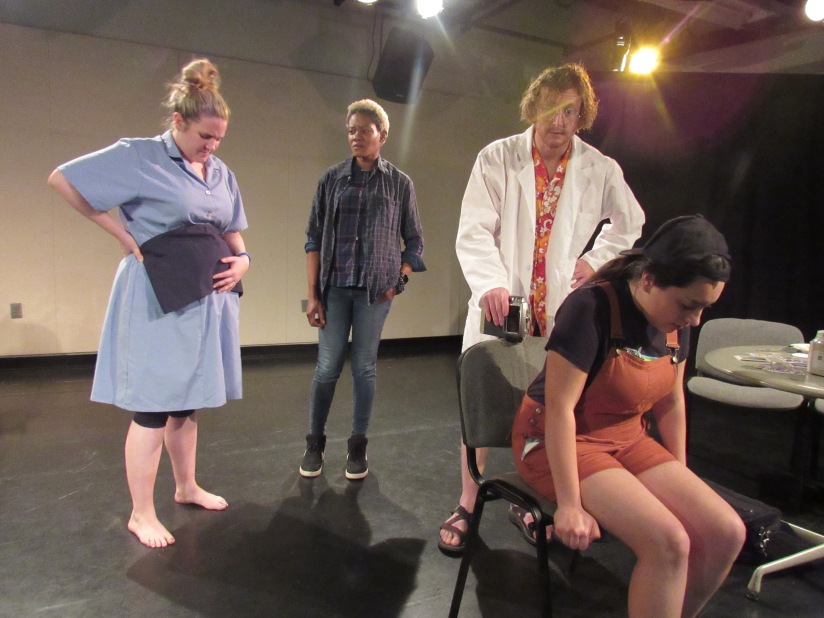 What is your favorite type of Pie? Convince us.

My favorite pie is lemon meringue. It’s the best pie because it has two of the best elements for a pie: cream/meringue on top & just lemon on bottom. It’s like an edible slice of lemonade, only better. I hear what you’re saying, “But what about other fruit pies? There are a lot that are structured in the way you just described.” Well to that I say; Lemon is the superior citrus fruit and on its own it is delicious, and as a pie! The pie is a perfect mix of sweet and tangy, the perfect refresher as dessert after a meal or even on its own. Lemons are good, pie is good. Together? Preeetttttyyyyyy nice.

What is next for you?
I’m not sure yet! I’m finishing my degree by May, so I haven’t been looking for other opportunities to keep focus. But working on a show is so much fun that I should probably just find more, huh?
Handles or anything we should follow?
I’ve only got an instagram, @space.unicron  if anyone would like to follow me there. (◍•ᴗ•◍)

“It’s about hearing someone.”

We are living through history. There has never been a more critical time to discuss the issues that Sensitive Guys by MJ Kaufman unabashedly sheds light on. The Me Too movement has sparked a heated debate that many politicians and people are choosing to ignore or sweep under the rug. Women are at the door, clamoring to have their stories heard and validated. When all of those experiences are being shared, it begs an important question: How often do we actually hear what the people in our lives are trying to communicate to us? Do we sit down to have a serious conversation with others with the intent of listening to their side or do we just want to share our own point of view and be told we’re correct?

Whether or not we care to admit it, sexual assault is pervasive in our society. It is a heated issue that requires us to actually sit down with one another as people in order to find a solution that works. This point is illustrated perfectly in Sensitive Guys through the formation of two separate groups with spoken confidentiality agreements. The men agree that they will not judge one another or report on one another (pending the severity of the problem, of course) and the women have a similar accord—no judgement, but we’ll help one another report if the want to do so exists. These two groups of people sit down and discuss the issue of sexual assault, but only amongst themselves. When the issue is brought up between two characters when they’re alone together, both are too afraid to confront the issue head on. This is a keen reflection of how the issue of sexual assault is being addressed in the States today.

Truth be told, it’s hard not to find a single incomprehensible moment throughout the whole play. Survivors in Kaufman’s play are talked out of their right to justice for the sake of not disrupting the status quo. Women are told to drop out of classes in order to not harm the futures of their perpetrators. It’s a story we’ve heard in the news one too many times. It’s a story that many of us have experienced one too many times.

I could sit here and write out each and every experience I’ve run into in my own life, or I could encourage you to sit down with the people in your life and start that terrifying discussion. Speaking from recent experience, you’ll be surprised what people don’t realize is problematic. Were we all unafraid enough to engage in authentic, difficult conversations, we could begin the important work of negating rape culture and eliminating sexual assault. It will require the courage to speak our truths (on both sides of the argument) and the courage to hear what others are trying to say. If we want to solve the problem, we have to be willing to understand one another, even when it feels impossible.

Sensitive Guys does a great job of showing what happens when we are afraid to talk to one another. In the Men’s Peer Education Group, their tradition of self-reporting turns into the act of smothering the issue and refusing to listen when somebody finally tries to broach the subject. Again, this is an acute comment on society as a whole. We’re all so used to smothering the issue of sexual assault that there are times when we can’t even talk to members of our own gender about it. Smothering the issue allows us to ignore our own feelings in regard to our actions or the actions of others. But we have to accept our feelings and take care of them. It’s poignantly pointed out in the play that we should not take care of one another’s feelings in such a fragile situation. The issue of sexual assault is not about keeping our truths from one another. It’s about confronting acts of barbarism head on and agreeing on what is and is not socially acceptable.

Directed by Clare Thompson and filled with a cast of powerful actors unafraid to deliver a raw, authentic performance, Sensitive Guys by MJ Kaufman is an important play to see. Go. Experience. Start a discussion. Be prepared to listen.

You can catch Sensitive Guys at Laughing Pig Theatre on June 22, 22, 28, and 29 at 7:30pm at the Mesa Arts Center in the Acting Studio. The Acting Studio is located up the big lit stairs on the second floor of Studios South. You can purchase tickets here.

Alaina is a writer who lives in Phoenix. She is a proud feminist and likes to spend her spare time volunteering with women’s rights organizations, reading voraciously, and spending time with her loved ones. 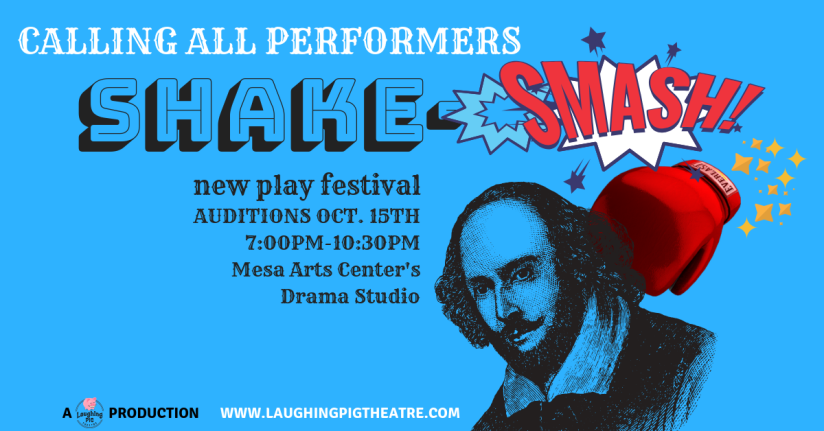 Our first ever festival of short plays inspired by works of Shakespeare! We have collected ten-minute and one-act plays from writers all over the country that reimagine, reinterpret, and revise Shakespeare’s life and work for a weekend of exciting new theatre.

We will be casting several short plays with unique requirements. Actors will potentially be cast in multiple roles and/or plays.

WHERE: Mesa Arts Center’s Drama Studio
On the second floor of Studios South above the Ceramic Studio. Take the elevator or stairwell next to the “Registration Office” and take the skywalk to the the hallway on the left (opposite building than Registration).

WHAT: Please prepare one, one-minute contemporary or Shakespearean monologue, and be prepared for potential cold reading.

HOW: Make an appointment here, and please email a headshot and resume to laughing.pig.theatre@gmail.com.

If cast, you will receive a small stipend. You may also be cast in multiple pieces. Performance dates include: December 7-9th.

We look forward to seeing you at auditions. For any other questions, email us at laughing.pig.theatre@gmail.com.